From a rickshaw puller to a successful innovator! From being a rickshaw puller in New Delhi to becoming an organic farming expert and an innovator, it has been an amazing journey for this farmer from Damla village in Haryana. There was a time when Dharamveer Kamboj could not even afford to pay for his daughter's school fees. "I spent about two years as a rickshaw puller. Unfortunately, I met with an accident and had to return to my village. As I was bedridden for months, my wife had to face lot of hardships," he says.
After he got well, he did not want to go back. He started to do organic farming in his village.
During his childhood, he used to help his mother while collecting herbs and was aware of the healing properties of medicinal plants. So he decided to plant aloe vera and stilia on a large scale, besides starting a nursery of medicinal plants.
But there was a problem. There was no way to process the yield into useful products. He needed a multipurpose food processing machine...
With his limited resources, he struggled for over eight months to design and build the first prototype of a cost-effective multipurpose food processing machine.
"Last month, I got the opportunity to give a demonstration of this machine to our chief minister, Bhupinder Singh Hooda. He was very impressed with my innovation. I have now been appointed as one of the board members at the Hisar Agricultural University. It is a great honour for me. Even President Pratibha Patil has asked me for a food processor," says an excited Dharamveer. Early years Dharamveer spent most of his time experimenting even during his school days. He used to take


part in science exhibitions in his school. He had once made an emergency light too.
Hailing from a poor family, this was not accepted or expected of him. His father wanted him to study hard and help the family. Though he passed the tenth standard, he did not study further.
His father was a farmer who also had a flour mill and a jaggery processing plant. Dharamveer used to assist his father.
After his marriage to Shyamudevi in 1986, life became more difficult. He had additional responsibility but no extra income to support her.
"I was forced to go to Delhi and work as a rickshaw puller. There was lot of pressure from my family due to our financial problems. It was a tough life, as I could not earn much either. My daughter was just a few months old and it was tough to be separated from my wife and child," he says.
While in Delhi, he found out that herbs and medicinal plants had good potential. But farmers at that time did not get a good price for these products in the village. Back to farming Once he recovered from his accident injuries, he decided to stay back in his village. He attended a training programme in the village development society to learn more on improving agricultural practices for six months.
He interacted with farmers and experts in the agricultural sector and took training in organic farming as well. He visited the herbal gardens in Champaghat and the National Park in Jabalpur to learn more about plants, their uses and biodiversity.
"When I started my experiments, people used to tease me. They never took me seriously. Even my father thought that I was just whiling away my time when I was working hard and carrying out various experiments," says 46-year-old Dharamveer.
Remarkable among his farming techniques was the cultivation of mushroom on sugarcane waste. The waste, which was otherwise burnt, was put to good use and there was a record production of mushroom.
His biggest assets were positive thinking, hard work and a desire to learn. Bumper yields His unique and efficient ways of farming won him many awards. He popularised the use of vermicompost and introduced improved varieties of vegetables and herbs.
In 1990, he became the first farmer in his area to cultivate hybrid tomatoes which saw a bumper yield.
He also developed some innovative devices like a battery-operated spraying machine using a tape recorder's motor, and an insect trapping device to be used in the field.
"When I started, I went to a shop that sold medicinal plants and seeds. I bought 85 types of seeds. I tried to see how many germinate and grow. At times, the plants that grew were different from the ones the shop gave. It was a long process but fruitful at the end," he says.
It was a new journey, full of new lessons. In this process, he discovered many new plants. A discovery He soon realised that to turn farming of aloe vera profitable, it had to be processed into various forms. At that time there was no machine available to do it. He could not afford to buy the machines that were available.
Besides, the machines could not carry out multiple functions. He knew if medicinal plants can be processed to make juice, pulp or powder, it would help many farmers like him. A cost-effective food processor was the answer to their problems.
"I started designing the food processor in 2003. It took me over 8 months to build the product. I spent about Rs 80,000 on developing this processor. I also had to borrow money for this," he says.
A local factory helped him in the fabrication and welding process. He built the first prototype in March 2005. Dharamveer had got an opportunity to visit various aloe vera and amla processing units in Rajasthan along with other farmers.
This experience made him understand the processing methodology. The first prototype had a problem of over heating when sufficient raw material was not put inside. Innovations "I have made several changes in the machine from the first prototype. The machine that I have today is far more advanced than the one I initially designed," says Dharamveer, who has already applied for a patent.
The Grassroots Innovation Augmentation Network (GIAN) and the National Innovation Foundation helped him with a grant and gave valuable suggestions to make it more viable and easily transportable.
"This is not the first device I built. The first one I built was in fact an automatic cleaning device which could sweep roads, about 8 km in an hour," says Dharamveer.
He made this possible with the help of an old auto engine and brushes.
For him, life has always been an unending pursuit in search of perfection. "As a child, I remember seeing him spend many sleepless nights. He was always thinking about doing things differently," says Pooja, his daughter. Prince: The food processor This food processor is unique as it is capable of extracting oil, juice from various herbs, fruits and vegetables, besides working as a pulp extractor, dry grinder, boiler or a sterilizer.
Dharamveer also devised a method of extracting juices and essence from aloe vera and amla for further processing. He has been using this machine for producing various cosmetic and health care products under the brand name Prince.
The machine has the capacity to process around 200 kg of herbal products and fruits and produce 150 litres of juice every hour. The low-cost of production ensures that even common people can buy the end products.
It can boil rice, make tomato ketchup, tomato puree, make any kind dry powder from spices or fruits. It can also extract the pulp of ripe mangoes without breaking the seed.
"When women workers used to grind amla earlier, their hands used to get bruised. They could only grind about 8 to 10 kilograms a day. With his machine, it is so much easier and 10 quintals can be processed in a day. 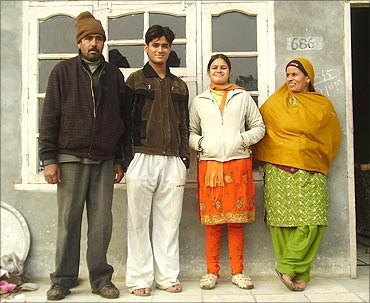 One machine, many uses This machine also acts as a boiler, sterilizer and a cooker. Compared to other available options, this machine is more cost-effective, portable and ideal for even unskilled workers.
Dharamveer has received the FPO license for the products manufactured using his machine. Today, he earns well by selling value-added products from different herbs, fruits and vegetables.
"I could not have achieved so much without my wife's support. Despite, suffering a lot, she believed in me and stood by me," says Dharamveer.
Shyamudevi, his wife, helps him actively in the farm and in making the processed food. "I used to feel bad when people made fun of my husband. But I never gave up hope. I made sure that our children would go to school and study well. My daughter's principal stayed close to our house and she guided us very well The best part is the people who ridiculed us respect us the most," Shyamudevi says.
Unfortunately, Dharamveer's father -- who opposed him so much -- did not live to see his son's achievements. Good business Dharamveer has also sold these food processing machines to farmers across the country. "My life has changed, so has the lives of many farmers in my village. I have sold 25 food processors so far, one of which has even gone to Kenya," says Dharamveer.
"There was a time when villagers used to call me a mad man. Today they respect me and seek my help. I earn about Rs 50,000 every month and employ about 25 people in the fields and for processing the products. Many important people visit my house. They either come to buy my products or just to meet me," he says. 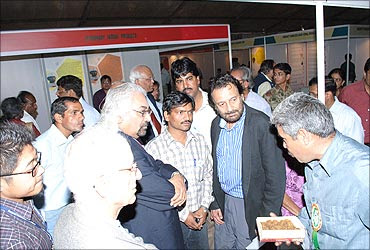 Now the pride of his village, Dharamveer has now moved from a dingy one-room shack to a well furnished house. "My son, Prince, has completed his diploma in computer engineering and daughter, Pooja, is doing her MBA," says a contented Dharamveer. "I feel very proud of my father's work. In fact, he says that while you are studying, I feel I am studying again. My project work is based on my father's innovation and its huge market potential," says Pooja.
"I want more farmers to be aware of this machine. Currently, few people know about this machine. I try to network with people during the exhibitions. This machine can also provide employment to many people interested in food processing, says Dharamveer.
"The government is giving a subsidy of Rs 40,000 to buy this processor. I just gave a demonstration to a 70-year-old person in Panipat. He was happy that it is very easy to use," he adds. There is a good demand for the Prince brand of aloe vera shampoos, churan, aloe vera gel, face pack, amla juice, laddoo and even burfi. These products are now available at stores in Haryana, Kanpur, Panipat, Gorakhpur, Muradabad and Chandigarh. Dharamveer also sends parcels to people who deposit cash in his account.
Dharamveer believes that the recipe for success is positive thinking and hard work.
"My father is an inspiration to me. I want this small scale operation to become a large enterprise one day and I will do everything possible to make that a reality," says Pooja.
Posted by RavinderSanjay at 11:05 PM